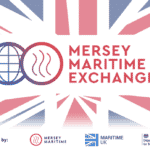 Industry body Mersey Maritime’s third annual Maritime Exchange conference will be a hybrid event, taking place on Friday, June 25, both online and in the magnificent surroundings of a Grade-II-listed former Victorian hydraulic tower in Wirral’s docklands.

Maritime 2050: Where are we now? is being organised by Mersey Maritime in partnership with the Department for Transport and Maritime UK and will discuss the progress of the UK’s Government’s Maritime 2050 report, which sets out the future of the sector over the next three decades.

The conference will feature a range of key-note speeches and panel discussions, focused around the themes of people; innovation; environment; competitiveness; and regional growth.

British government ministers speaking at the event are expected to offer the latest updates on new post-Brexit trade deals and on the recovery from the pandemic. New announcements on major investment into the maritime sector are also anticipated.

The conference is being sponsored by Brabners, Nautilus International, OPS Wind, and Peel Ports Group. The Grade II-listed 19th century hydraulic tower building is a copy of the Palazzo Vecchio in Florence and is close to the Birkenhead waterfront. The building is set to be the centrepiece of
the proposed £23m Maritime Knowledge Hub in Wirral Waters.

This website uses cookies to improve your experience while you navigate through the website. Out of these, the cookies that are categorized as necessary are stored on your browser as they are essential for the working of basic functionalities of the website. We also use third-party cookies that help us analyze and understand how you use this website. These cookies will be stored in your browser only with your consent. You also have the option to opt-out of these cookies. But opting out of some of these cookies may affect your browsing experience.
Necessary Always Enabled
Necessary cookies are absolutely essential for the website to function properly. This category only includes cookies that ensures basic functionalities and security features of the website. These cookies do not store any personal information.
Non-necessary
Any cookies that may not be particularly necessary for the website to function and is used specifically to collect user personal data via analytics, ads, other embedded contents are termed as non-necessary cookies. It is mandatory to procure user consent prior to running these cookies on your website.
SAVE & ACCEPT
Shopping cart
There are no products in the cart!
Continue shopping
0