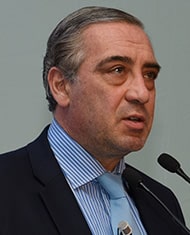 Nikolas P. Tsakos is the Founder, President and CEO of Tsakos Energy Navigation (TEN) Limited, a pioneering company which is the longest established Greek shipping public listing. TEN was firstly quoted on the Oslo Bors in 1993 and in the New York Stock Exchange since March 2002. It owns and operates one of the youngest fleets in the world with 65 tankers of 7.3m dwt. Currently, TEN´s fleet includes a modern diversified fleet of conventional and ice-class environmentally friendly vessels covering LNG, DP2 Shuttle tankers, VLCCs, Suezmaxes, Aframaxes, Panamaxes and Handysize tankers.

Mr Tsakos comes from a traditional Chios seafaring family and has been involved in the maritime industry since 1981. He has spent a total of two years at sea and served as an officer in the Hellenic Navy. He received his BA Degree in Economics and Political Science from Columbia University, New York in 1985 and his Masters Degree in Shipping Trade and Finance from the City University Business School in London in 1987. He is married and has three children.

In 2014, elected as the Chairman of the Independent Tanker Owners Organisation (INTERTANKO) and additionally holds seats on various boards and associations.

In 2015, he was awarded Capital Link’s “Maritime CSR Leadership Award” and Lloyd’s List “Newsmaker of the Year Award”. In 2011, he received an Honorary Doctorate from the City University Business School for his pioneering work in the equity financial markets relating to shipping companies and has also received the following various awards: Lloyd’s List award for the “Best Tanker operator in 2006”, “EUROPE’s 500 award in 2005”, Lloyd’s List award to “HELMEPA for achievement for clean and safe seas in 2004” and “Best Maritime Manager of the New Generation” awarded at the Academy of Athens.

Nikolas is the Co-Founder of the Maria Tsakos Foundation (named after his late sister), a charitable organization for the well-being and education of young, talented men and women focusing on maritime studies and tradition.