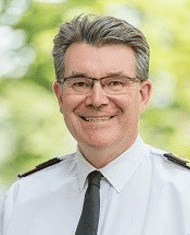 The Royal Navy’s Director for Strategy, International Relations, Maritime Sector, Parliamentary & Academic engagement, Iain represents the Royal Navy on Maritime UK’s National Council, the UK Chamber of Shipping Supervisory Board and was a member of the London International Shipping Week 2019 Advisory Board.

At sea, Iain commanded destroyers (HMS DRAGON & HMS GLOUCESTER), Minehunters (HMS SHOREHAM) and Offshore Patrol Vessels (HMS LEEDS CASTLE) on operations across the globe from the Falkland Islands to the Caribbean, from Chile to the Middle East.

Ashore, he planned the UK’s military operations across Africa including the ebola crisis in Sierra Leone (2014) and the UK’s deployment to support the UN in South Sudan (2015). In 2016/17 Iain was the Chief of the Defence Staff’s personal Liaison Officer to the Chairman of the Joint Chiefs of Staff in the Pentagon – a unique and fascinating insight into the transition between the Obama and Trump Administrations

A graduate of the Higher Command & Staff Course, Iain holds an MA in Defence Studies from King’s College London. He is a Freeman of the City of London and a Younger Brother of Trinity House.